Democratic Sen. Joe Manchin signaled Friday he could oppose $2,000 direct payments, jeopardizing one of his party’s priorities for when it takes unified control of the White House and Congress.

The Washington Post first quoted the West Virginia lawmaker as saying he would “absolutely” oppose another coronavirus relief check to Americans. He later clarified his comment in a tweeted statement, saying, “If the next round of stimulus checks goes out they should be targeted to those who need it.”

Manchin, the most conservative Democrat in the Senate, questioned the cost of the proposal. The nonpartisan Joint Committee on Taxation previously said increasing the payments in the aid law passed last month to $2,000 from $600 would cost $463 billion.

His stance raises doubts about what kind of direct deposit plan could get through the Senate once Democrats hold a razor-thin majority. The party will have control of a 50-50 chamber through Vice President-elect Kamala Harris’ tiebreaking vote in the coming weeks, after inauguration on Jan. 20 and the swearing-in of Democratic Senators-elect Raphael Warnock and Jon Ossoff from Georgia.

Manchin’s comments appeared to cause a temporary dip in major stock indexes on Friday.

President-elect Joe Biden and Democratic congressional leaders have called for trillions of dollars more in pandemic rescue spending as Americans struggle to pay bills and rent during a sustained virus outbreak. Biden called the $900 billion aid plan approved last month a “down payment.” The push for more assistance comes as the Labor Department reported the U.S. lost 140,000 jobs in December.

Biden, Warnock and Ossoff said the election of Democrats in Georgia would mean the Senate can pass $2,000 checks.

Republicans can ensure most legislation will need 60 votes to pass. However, Democrats are expected to have three opportunities to use the budget reconciliation process, which would allow certain measures related to spending to pass with a majority vote.

Manchin may not doom passage of the payments. At least one Republican — Sen. Josh Hawley of Missouri — backed $2,000 checks last month as President Donald Trump pushed for them. It is unclear if or how the president’s departure or the pro-Trump mob attack on the Capitol this week will affect the GOP politics around the payments. 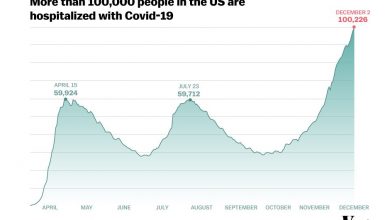 The exponential improve in Covid-19 hospital stays on one chart